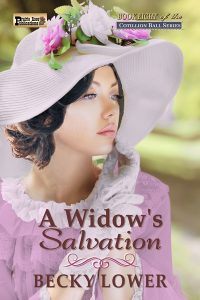 Beautiful Pepper Fitzpatrick Brown’s heart is broken when her husband, Michael, is killed on the bloody battlefield at Manassas. One of the first casualties of the Civil War, Michael’s death has left Pepper raising three small boys on her own—and trying to live without the man she believed she’d grow old with. Honoring Michael’s memory, she volunteers at the MacDougall Army Hospital in the Bronx, doing whatever she can to help the wounded.

The drab existence of handsome Colonel Elijah Williams, head surgeon at the Army hospital, has narrowed to nothing but the bloody war and the horrendous wounds he treats day after day. He carries a secret—a nightmare that holds him in its gory grip each time he falls asleep, reminding him of what awaits him in his waking hours. But when Pepper Brown walks into his life, everything changes—for both of them.

Is Elijah ready to take on a ready-made family and the responsibilities that come with it? Can Pepper let go of her grief and embrace love once again? In a war-torn country that has suffered so much loss, Elijah and Pepper might stand a fighting chance at finding happiness together if they can save what’s left of their hearts!