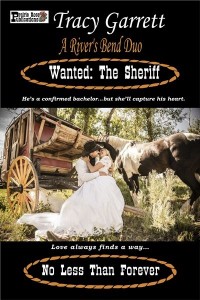 Two stories in one volume.

Martha Bittner may be considered a spinster at twenty-seven, but she’s not planning to stay that way. For four years, she’s wanted the sheriff of River’s Bend, Missouri, to notice her as more than a friend and a really good cook. With the first annual spring dance only weeks away, Martha decides to announce her intentions — and de-clares the sheriff a wanted man.

Sheriff Matthew Tate always thought he was better off a bachelor. Growing up in Boston society, where marriage is a business transaction and wealth his greatest asset, he’s learned to distrust all women’s intentions. None of them even catch his eye anymore — until pretty Martha Bittner tells him exactly what she wants… and he wonders why he ever resisted capture.

No Less Than Forever

Doctor Franz Bittner is satisfied with his life as it is. He has a good practice in a place where he is respected, in spite of his German birth. He has good friends and enough income to provide him with a few comforts. A wife would only complicate things. Then a tiny blond stranger is pulled from the river and everything changes. With one smile she captures his attention—and steals his heart.

Rebekah Snow Redmann barely survived her abusive husband’s attack. Though she was given to him to pay her father’s debts, she’d rather die than go back. Then she ends up in the care of the handsome local doctor and he stitches up more than her wounds—he mends her soul. With him, she discovers everything that she believes she can never have...a love that will last forever.