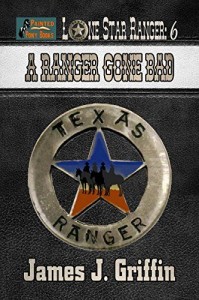 Cattle rustling is about to get the best of some of the finest ranches in Texas—until the Rangers come to call. But while Nate, Hoot, and the rest of Captain Quincy’s Texas Rangers are out to arrest the outlaws, things take an unexpected turn for the worse. When Nate throws in with the renegade rustlers, his Ranger friends can hardly believe it. It seems that the compadre they’d trusted and accepted into their regiment as one of their own has turned on them—but can it be true?

Nate appears to enjoy the life of crime as he not only steals cattle, but robs banks and stagecoaches on his own before he joins up with Conrad Jordan’s gang of thieves. But in a deadly battle between the Rangers and the rustlers, which side will Nate pick? Will he remain true to the lawmen who’ve taken him in and made him one of their own—or is he truly A RANGER GONE BAD?