A Heart on Hold 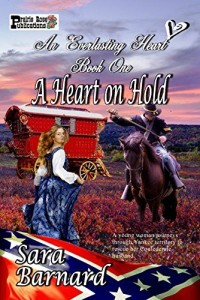 Charlotte Adamsland is separated from her husband, Sanderson Redding, the day after their marriage. A captain in the Confederate Army, Sanderson must return to his unit, leaving Charlotte alone on their Arkansas homestead to fend for herself. Yankees camp around the town of Altrose, bringing their own kind of lawless danger. And then, one dark day, a Southern soldier arrives with terrible news…Sanderson has been killed trying to escape a Yankee prison.

Sanderson has found salvation and hell in a single turn of events he could never have imagined—his much-younger brother, Jackson, is his Yankee guard. When Jackson’s cruel commanding officer learns of the brothers’ family ties, he devises a wicked plan to see them both dead. Jackson is determined to get his brother to safety—but a last-minute betrayal by another prisoner could be the death of both brothers.

Charlotte can’t accept the news of Sanderson’s death—he promised to come back to her. She heads north armed with only her faith in God and her beloved horse to bring her love home—one way or the other. Will she be able to rescue him? Or will her love remained locked forever in A HEART ON HOLD…