A Dangerous Liberty (Women of Destiny) 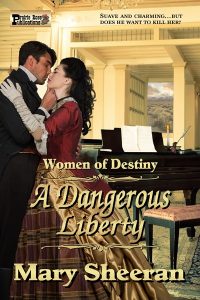 World-renowned composer and pianist Elisabeth Winters returns to the United States from Europe only to discover her life is in terrible danger. Though she wants nothing but to perform her concerts, she finds herself embroiled in layers of political and personal turmoil that have intertwined through the years she’s been abroad. The stakes are high—her life is in certain jeopardy.

When she meets handsome William de la Cuesta under odd circumstances, she can’t deny her immediate feelings of trust. Yet, there is something that disturbs her about him, as well…a memory she can’t quite grasp. How can she trust someone she doesn’t know—someone like de la Cuesta, who could have everything to gain by her murder? Does she have a choice?

As Elisabeth invokes controversy on many levels, her world becomes even more chaotic with the treachery she discovers taking place in her own inner circle. As the daughter of a prominent senator who was murdered many years before, she takes up the causes he fought and died for—and discovers those powerful men who killed him are now out for her blood, as well.

In a post-Civil War America, can one woman fight to vanquish the same injustice her father battled? Elisabeth believes she can—for love of family, country, and William de la Cuesta—the love of her life— taking the risk of A DANGEROUS LIBERTY is worth everything!