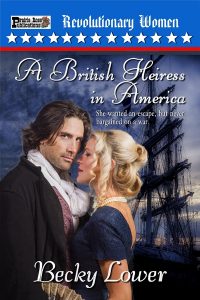 Her father plans for her to marry stodgy…old…and rich.

What’s a beautiful British heiress to do if she’s going to escape a life of passionless marriage? With her father planning to sell her off to the highest bidder in order to support his own lavish lifestyle, Pippa knows there’s only one thing she can do to save herself.

Lady Philippa dons boys’ clothing and stows away on a London ship destined for the American colonies and a new life. One full of hope, freedom, and the chance to finally live up to her feisty nickname among the rough sailors—‘Pip.’

But instead of finding independence on the high seas, Pippa is plunged deep into the dangerous world of espionage–and the arms of handsome Daniel Simmons, a merchant sailor for the British—who is also an American Revolutionary spy!

Torn between allegiance to her home country and the passion she’s always been searching for, Pippa now faces an unexpected threat—and it may cost Pippa and Daniel the very freedom—and love—they’ve both been searching for.

If they manage to survive the very heart of the beginnings of the Revolutionary War, can the daring spy find love in the arms of A BRITISH HEIRESS IN AMERICA?